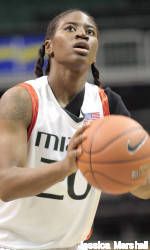 CORAL GABLES, Fla. – Junior Albrey Grimsley knocked down a career-high 20 points, hitting 9-of-12 attempts from the floor, to lead Miami past Texas State 92-67 Saturday night at the BankUnited Center.

Grimsley was one of five Hurricanes (8-3) to score double figures against the Bobcats (6-4) as Miami improved its home unbeaten streak to a perfect 6-0.

Texas State’s only lead of the game came less than a minute in when Ashely Leffingwell, who finished with 13 points, scored the first basket of the game.

Maintaining a comfortable lead through most of the second half, the Hurricanes wouldn’t let Texas State within 11 points of the lead and jump out to as much as a 30-point lead with less than two minutes remaining before taking the 25-point, 92-67 victory.

Grimsley’s mark of 20 points topped her previous personal-high of 18 set her freshman season.

As a team, the Hurricanes hit a season-high 53.7 percent from the field while out-rebounding Texas State 51-34.

Miami returns to action Tuesday, traveling to Houston for a 9 p.m. (EST) match-up.