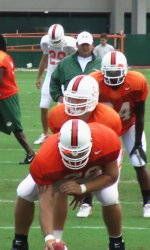 Coral Gables – – Fresh off final exams and a three-week-long layoff,, the Miami Hurricanes returned to the Greentree Practice fields for the first full day of preparations for Nevada in the MPC Computers Bowl, which will be played in Boise, Idaho on December 31. The game will be nationally televised on ESPN.

In addition to concentrating on their final exams as the fall semester came to a close this week, Hurricanes football players had maintained a conditioning and weight-training regimen for the past two weeks.

Coach Larry Coker seemed pleased with the team after their first day of practice since their regular-season ended with a win over Boston College on November 23. “It was good to get back. The guys had a rest and they’re healthy,” Coker said. “For this bowl game, I want to be well-prepared. I want us to have a lot of fun and go out and try to win the football game.”