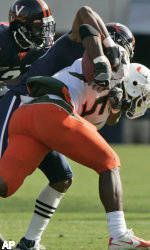 CHARLOTTESVILLE, Va. (AP) -Jameel Sewell ran for two touchdowns and played his best game by far, and Virginia’s defense dominated until the game was essentially over Saturday in the Cavaliers’ 17-7 victory.

The Cavaliers (5-6, 4-3 Atlantic Coast Conference) kept alive their hopes of qualifying for a bowl game with the victory and damaged Miami’s postseason hopes.

Virginia will have to win at No. 19 Virginia Tech next weekend to qualify, while the reeling Hurricanes (5-6, 2-5) will take a four-game losing streak into the finale of a tumultuous regular season against No. 20 Boston College at the Orange Bowl.

Despite it all, the Hurricanes have always been able to count on their defense. But Sewell and the Cavaliers took it apart early and kept the ‘Canes from doing any damage at all until the lead was 17-0 and just more than three minutes remained. Virginia held Miami to 263 yards.

Kirby Freeman, making his second start after season-ending surgery to Kyle Wright, threw for 152 yards, including a 77-yard touchdown to Lance Leggett with 3:08 remaining. His other 10 completions – in 17 tries – went for just 75 yards.

Sewell, a redshirt freshman making his eighth start, was much better. He finished 23-for-33 for 217 yards, and scored on runs on 12 and 2 yards. The latter capped a 28-yard drive set up by a fumble recovery at the Miami 28.

The Hurricanes had not allowed any team to run for 100 yards all year, but with Jason Snelling getting 57 on 28 hard carries and Sewell breaking off four runs of 10 yards or more, the Cavaliers finished with 132 on the ground and 349 total yards.

The Cavaliers led 14-0 at halftime and could have had more. They drove to the Hurricanes 26 with 16 seconds left in the half, used their last timeout and opted to go for a field goal on third down. Chris Gould’s attempt from 43 yards was wide right. He missed a 44-yarder the same way early in the second half.

The Hurricanes came in with the nation’s No. 5 defense, but Sewell picked it apart with ease on the opening series, driving 92 yards in 12 plays for a touchdown.

Sewell completed 6 of 7 throws on the drive, the big one a 44-yarder to tight end John Phillips, and had runs of 13 and 12 yards, the latter for the touchdown.

After an exchange of punts, Antonio Appleby jarred the ball loose from Sam Shields on a short pass and Clint Sintim recovered for Virginia on the Hurricanes’ 28. Sewell hit Kevin Ogletree for 25 yards on the next play, then ran it in three plays later.