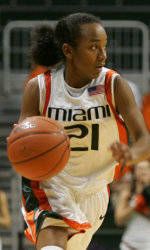 SANTA CLARA, Calif. – Miami’s backcourt duo of senior Renee Taylor and Maurita Reid combined for 51 points to help the Hurricanes mount a second-half comeback en route to a an 85-83 victory over Santa Clara Wednesday night at the Leavey Center.

Taylor turned in 20 of her game-high 26 points in the second half for the Hurricanes, (3-0) highlighted by a game-tying layup in which she drew a foul and successfully converted to give Miami the 78-77, go-head bucket over the Broncos (0-2).

With the start of the second half Reid knocked down a three-pointer to cut the game to 45-44, but SCU answered on their next three possessions with threes by Chandice Cronk, who finished with 25 points and six three-pointers, and Ashley Graham to open the lead to 10 at 54-46.

The Hurricanes chipped away at the lead over the next eight minutes and, down 77-71 with under six minutes left, Reid, who finished with 10 rebounds, took a ball nearly the length of the floor to bring UM with four at 77-73.

After holding the Broncos on their next possession Taylor knocked down a jumper to cut the lead to two, and Santa Clara’s failed to answer their next time down when Brittany Denson, who finished with a career-high 18 points with 10 rebounds, blocked Tracey Walker’s shot.

Taylor took the deflected shot from one basket to the other to score while drawing the foul by Gonnerman. Taylor converted the three-point play to put UM up 78-77 with 4:17 left to play.

Santa Clara tied it up 79-79 at the three-minute mark, but once again Taylor answered with a layup on UM’s ensuing possession as Miami eventually hung on to the 85-83 victory.

The Hurricanes return to action Friday traveling to Morega, Calif. for a match-up with Saint Mary’s at 10 p.m. (EST)