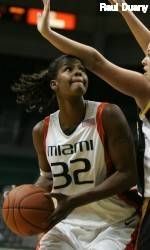 Hurricanes Travel Cross-Country for First Road Trip of the Season

Coming off a 78-71 win over Wisconsin-Milwaukee Monday at the BankUnitedCenter, second-year head coach Katie Meier and the Hurricanes are off to the school’s sixth-consecutive 2-0 start.

The Hurricanes are led by senior guard Renee Taylor who has seen scoring outputs of 18 and 23 in Miami’s first two games of the season.

Taylor is one of two Hurricane starters averaging double figures in 2006-07 followed by junior guard Albrey Grimsley’s 12.5 points per game.

Fifth-year head coach Michelle Bento-Jackson and the Broncos won their season-opening contest against Long BeachState 76-67 last Sunday in Long Beach. The Broncos hit an impressive 10-of-24 three-point attempts while limiting LBSU to just four three-pointers on the day.

This will be the first meeting between the Miami and Santa Clara women’s basketball programs.