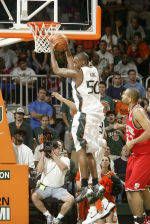 CORAL GABLES, Fla. (AP) – Anthony King had 19 points and 15 rebounds to lead Miami over Florida International 73-50 on Saturday in the season opener for both teams.

King was 9-for-12 from the floor and set a career-high in scoring. His previous high was 17 points against North Carolina State on December 18.

The game was close in the first half until Miami went on an 11-2 run and took a 42-24 lead into halftime. FIU was unable to get any closer than 14 points, and trailed by as many as 26 points in the second half.

Jimmy Graham scored seven points during the run. He finished with 10 points. Jack McClinton, a Siena transfer, made his Hurricane debut scoring 14 points. Dwayne Collins had 10 points and 12 rebounds.