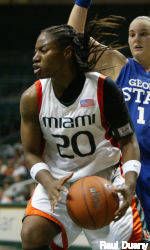 One of Taylor’s biggest baskets came with 48 seconds remaining with the Hurricanes (1-0), who led the Panthers (0-1) by as much as 22 with just under 12 minutes to play, up 62-58. Taylor, rebounding from a first half which saw her shoot just 2-of-8 from the field to score 14 second-half points, pulled up from the top of the paint to knock down a jumper giving Miami a six-point, 64-58 lead.

Taylor sank four free throws over the next 33 seconds to secure the 68-60 win for the Hurricanes extending UM’s streak of 16-straight seasons with a win in the home-opener.

The win over the Panthers marked an impressive return for sophomore center Brittany Denson who recorded 13 points and a career-high 13 rebounds in her first game back since suffering a knee injury that forced her to miss the final eight games of the 2005-06 season.

Junior guard Albrey Grimsley registered 15 points in the win – her highest point total since back-to-back 15-point outings in mid-January of the 2004-05 season.

Helped by Denson’s 10 points and junior guard Maurita Reid’s eight, the Hurricanes, shooting 51.6 percent from the field, led Georgia State 39-25 at the end of the first half.

Miami continued to roll with the start of the second half, outscoring GSU 14-9 through the first eight minutes to take a 22-point, 56-34 lead.

Reid finished 11 points on the night and was one of seven of UM’s 10 active players to see 12 or more minutes.

The Hurricanes return to action Monday, Nov. 13 against Wisconsin-Milwaukee at the BankUnited Center.

Monday’s game will be Youth Day at the BankUnited Center with all elementary and middle schools invited to participate as the University of Miami provides complimentary admission, transportation and lunch. For more information contact the UM Marketing Department at 305-284-2678.

All UM students and employees are also invited out for a complimentary admission and lunch with a valid CaneCard on behalf of the University of Miami.