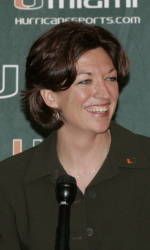 Head women’s basketball coach Katie Meier along with the University of Miami has announced the signing of Briyana Blair (Orlando, Fla.), Damisha Moore (Cartersville, Ga.) and Epiphany Woodson (Charlotte, N.C.) to National Letters of Intent to play at UM as part of the 2007 recruiting class.<?xml:namespace prefix=”o” ns=”urn:schemas-microsoft-com:office:office”?>

“We have really found three players that fit the mold of the type of player that I have been successful with,” said Meier of the trio, part of Meier’s second recruiting class at UM, that have combined for numerous all-state and all-conference accolades and boast state and AAU championships.

Blair, a 5-foot-10 wing out of <?xml:namespace prefix=”st1″ ns=”urn:schemas-microsoft-com:office:smarttags”?>Orlando’s BooneHigh School, is regarded as one of the top 15 players in the state of Florida by FloridaHoops.com. Last season, she averaged 12.0 points and 4.8 rebounds per game to help lead Boone to its third-consecutive district championship.

A two-time All-State Honorable Mention and 2006 All-Central Florida and All-Orange County First Team selection for her play in high school, Blair has also excelled among the nation’s top competition as a member of the Orlando Comet Red, who recently won the 2006 AAU National Championship.

“Briyana is a high energy player who can really disrupt teams on defense,” said Meier. “She is a player who runs the floor well and really gives it her all every single play. She comes from a great basketball background. Her father, Garfield, coaches her AAU team which won the national championship and her brother plays for Stetson. She has played against the nation’s top players each summer so I think the level of competitiveness and the championship mentality she has will be a huge asset to this program.”

A 5-foot-8 guard out of CartersvilleHigh School, Moore has averaged 26.0 points and 12.0 rebounds over the last two seasons, including a 27 point, 11 rebound per game average in 2006.

“Damisha is going to surprise a lot of people,” said Meier. “I feel like she will be one of the more prolific scorers in this year’s class. She can really put the ball in the basket and is extremely creative in her ability to score. She is very athletic and is still growing and developing as a basketball player. With where she is now as a player and what we feel she is capable of, I think she is going to be a very special player here at the University of Miami.”

Considered to be one of the best players coming out of the 2007 class Woodson is rated the No. 3 senior in the state of North Carolina as well as the No. 53 guard in the country and one of the top 100 players regardless of position by Scout.com. She is also regarded as the No. 71 player overall by the All-Star Girls Report and is a 2006-07 Street and Smith Preseason Honorable Mention All-American and a 2007 McDonald’s All-America nominee.

“Epiphany is a very special to me because I’ve known her since she was in the eighth grade and always wanted to coach her,” said Meier of recruiting Woodson at UNC Charlotte prior to coming to Miami in 2005.

In her junior season Woodson averaged nine points, five assists and two rebounds per game to help Providence Day to 29-1 overall record and a state championships. Those numbers helped earn her CISAA All-Conference honors for the third-consecutive season and NCISAA All-State accolades for the second year in a row.

“She is the consummate point guard; if you need her to score, she will score. If you need her to defend, she’ll defend. If you need her set other people up, she’ll set them up. She has played at an extremely high level where she has won state championships and AAU championships. She comes from a great high school program where she was coached by a terrific coach in Barbara Nelson. Coming from such a tremendous background is really going to help her come in and assume our point guard responsibilities.”

“In recruiting you always try to address the losses you will have over the next couple of years,” said Meier. “We lose one senior guard in Renee Taylor next season and behind her we have Albrey Grimsley and Maurita Reid, who are both juniors, so I think we really met our needs in terms of bringing in guards to strengthen up our perimeter.”