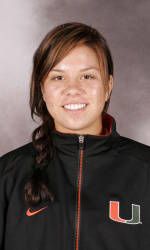 Rachel Rigamat, who followed up on her own deflected shot to head in a goal and give the UM Women’s Soccer Team a 1-0 victory over the No. 8 ranked Virginia Cavaliers Sunday, has been named the Muscle Milk Student Athlete of the Week for the period of September 25-October 1.

Rigamat, a sophomore forward from LaCrescenta, Calif. scored the goal in the 54th minute of the UVA contest. After firing a shot toward the short-side post that was blocked by the Cavaliers goalie Christina DeVries, Rigamat regained herself quickly in front of the net and headed in the deflected shot for the UM victory.

As a freshman in 2005, Rigamat was named to the Soccer Buzz Southeast Regional All-Freshman Team.