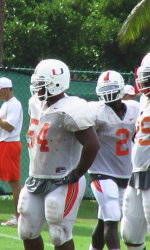 Hurricanes Wind Down Preparations For Houston

CORAL GABLES, Fla. – The Hurricanes practiced fast with plenty of special teams work and repetitions on defense in preparation for Saturday’s game against undefeated Houston in an afternoon workout at the Greentree Practice Fields on Thursday.

Part of the special teams work has been focused toward the kicking game, and senior placekicker Jon Peattie has responded, head coach Larry Coker said. “Peattie has done a good job. We have been putting more pressure on him and giving him more opportunities under pressure situations.”

The Hurricanes have also used last week’s open date and this week to heal. “We have some guys back in the lineup healthy, who haven’t been able to work for the last two weeks Coker said. “That’s been encouraging.”

At the forefront of that group is sophomore left tackle Reggie Youngblood, who has missed the last two games with an ankle injury

“He’ll play a lot, he just may not start,” Coker said. “He’s been off with an injury and he’s a little bit rusty.”

Coker also cited the play of Chris Rutledge as one of the reasons Youngblood may not start right away coming back from injury.

Miami will have a walk-through on Friday before reporting to the team hotel.