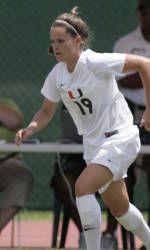 CORAL GABLES, Fla. – The University of Miami women’s soccer team will play host to ACC rivals Virginia Tech and Virginia at Cobb Stadium beginning Thursday night with a match-up with the Hokies at 7 p.m. The Hurricanes return Sunday for a contest with the eighth-ranked Cavilers beginning at 1 p.m.

Head coach Tricia Taliaferro and the Hurricanes, who are 6-3-0 overall and 0-2-0 in league play, return home following a pair of losses last Thursday and Sunday on the road to ACC counterparts NC State and fourth-ranked North Carolina, respectively.

Sophomore forward Paulelette Ricks-Chambers leads the Hurricanes with three goals on the year. Seven additional UM players have recorded at least one goal including junior forward Rebecca Tweneboah, sophomore forward Rachael Rigamat and redshirt sophomore midfielder Jenna Levenson who each have a pair.

Coming off losses to Duke and Wake Forest last week, Virginia Tech heads to Coral Gables with a 4-4-1 overall record and a 0-2-0 mark in ACC matches.

The Hokies are led by a pair of freshmen in forward Emily Jukich, who has registered a team-high six goals, and forward Jullian Johnson, who has nine assists on the year.

Sophomore forward Jess Rostedt – one of nine players to score at least one goal this season – leads UVa with five goals, including three game-winners. Rostedt, along with UNC’s Heather O’Reily, was named the ACC Co-Player of the Week after netting the tie-breaking goal in a 2-1 decision over Wake Forest Thursday and the game-winner in a 1-0 victory over Duke Sunday.

Tickets to both matches are just $5 dollars for adults and $3 dollars for children and senior citizens per game. To purchase tickets or additional information, please contact the Hurricane Ticket Office online at hurricanesports.com or call 1-800-GO-CANES.

Fans will be treated to an autograph session with the UM soccer team following Sunday’s match against Virginia.