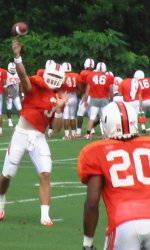 Hurricanes Get Back After It Tuesday

CORAL GABLES, Fla. (www.hurricanesports.com) – The University of Miami football team has this upcoming Saturday off and won’t play a game until Sept. 30, when the Houston Cougars come to town. But you wouldn’t know that if you watched Tuesday afternoon’s workout at the Greentree Practice Fields.

“The guys practiced extremely hard, we coached hard and we had a good day,” head coach Larry Coker said.

The practice was marked by a renewed sense of determination and focus. “Their spirit was great,” Coker said of his team.

Last week’s loss to Louisville left the Hurricanes down, but not out. Although the team and staff would love to even their record with a win as soon as possible, the off week will have its benefits.

The Hurricanes will practice again Wednesday afternoon at the Greentree Practice Fields.

Notes: Senior receiver Darnell Jenkins (leg) was held out of practice and Coker gave no indication of when Jenkins would be back. “I think (Darnell) will be fine,” Coker said. “The open week will help him.” …. Coker expects Reggie Youngblood (ankle) to be back for the Houston game … James Bryant has been moved to the offense to play fullback and H-back after spending the beginning of the season at linebacker.