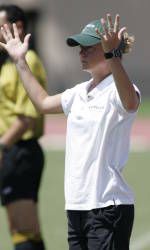 With the score tied 1-1, FAU’s (1-2-1) Susanna Lehtinen scored on a penalty kick at the 101:08 mark of the second overtime following a UM (5-1-0) foul in the box. The loss snaps UM’s school record-tying five match win streak to open the season.

In a back-and-forth match, the Owls edged out UM in shots by a total of 13-to-11, including eight shots on goal to the Hurricanes’ six.

“I thought we played well tonight,” said head coach Tricia Taliaferro. “We were solid in the back, creative in the midfield and dynamic up top, but lack of experience cost us the game tonight. I compliment FAU because they capitalized on their only two true scoring chances. We look forward to getting rest and focusing on South Florida.”

After 81 minutes of scoreless play, Miami benefited from an own goal by the Owls in the 82nd minute, giving the Hurricanes a 1-0 advantage with under 10 minutes left in regulation.

With less than three minutes remaining in the match the Owls rebounded from the own goal to score past UM keeper Lauren McAdam, who would finish with six saves on the night. The FAU goal was set up on a cross by Beckie Ware, who played the ball to Alicia Tirelli. Tirelli was able to split two UM defenders and scored in the far right corner in the 88th minute.

The two teams played out the remainder of regulation and through the first overtime before Lehtinen registered the game winner in the second minute of the second overtime.