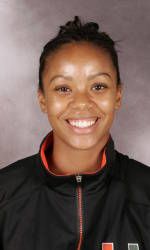 CORAL GABLES, Fla. – Miami sophomore midfielder Paulelette Ricks-Chambers has been named the SoccerFla.com Player of the Week for her efforts last weekend at the UNCG Soccer Classic which included a two-goal performance Sunday in a 3-1 win over UNC Greensboro.

Ricks-Chambers registered the first goal of the match, and her first of the season, in the 24th minute against the Spartans, knocking down a rebounded shot from teammate Meghan McKinsey and firing off a shot past the UNCG keeper.

After UM took a 1-0 lead into the break, Ricks-Chambers added her second goal of the day, and the eventual game winner, just four minutes into the second period, sending off a shot from outside the box and into the back of the net.

Miami’s 4-0-0 start is the second-best season-opening run in school history, second only to the 2001 team which opened with a school-record five-consecutive victories. That 2001 team was the first and only team in UM history to eventually advance to the NCAA Tournament.