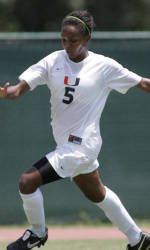 GREENSBORO, N.C. – Sophomore midfielder Paulelette Ricks-Chambers netted a pair of goals Sunday to lead Miami to a 3-1 victory over UNC Greensboro in the final day of competition at the UNCG Soccer Classic. The victory improves UM’s season opening unbeaten streak to four-consecutive matches marking the second-best start in school history.

Ricks-Chambers registered the first goal of the match, and her first of the season, in the 24th minute knocking down a rebounded shot from teammate Meghan McKinsey and firing off a shot past UNCG (0-4-0) keeper Katherine Ryan.

After UM took a 1-0 lead into the break, Ricks-Chambers added her second goal of the day just four minutes into the second period, sending off a shot from outside the box and into the back of the net.

The Hurricanes’ Sammy Sanderson and Julia Demetrius teamed up to add an insurance goal in the 75th minute after Sanderson collected a rebound and fed the ball to Demetrius who capitalized.

Deven Beachum scored UNCG’s lone goal of the day on UM keeper Lauren McAdam in the 82nd minute. Beachum fielded a rebound following a corner kick by teammate Karla Davis and was able to put the ball in the net past McAdam, who would finish with seven saves on the afternoon.

“We were very excited to get two wins on the road this weekend,” said head coach Tricia Taliaferro. “I was pleased with our ability to finish the chances we had today and felt like we really played with a great deal of discipline and intensity.”

Miami’s 4-0-0 start is the second-best season-opening run in school history, second only to the 2001 team which opened with a school-record five-consecutive victories. That 2001 team was the first and only team in UM history to eventually advance to the NCAA Tournament.

For her efforts Sunday, Ricks-Chambers was named to the UNCG Soccer Classic All-Tournament Team along with teammates Rebecca Tweneboah, Jenna Levenson and Bryn Heinicke.

“I am extremely pleased that Rebecca, Paulelette, Jenna and Bryn were recognized for their efforts this weekend,” said Taliaferro. “They all were a major part of the success we saw.”