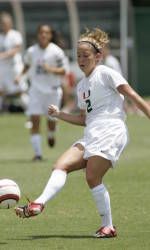 With the victory over Panthers (0-3-0) the Hurricanes improve to 3-0-0 marking the first time since the 2002 campaign and just the fourth time in school history that a UM team has opened a season with three consecutive wins.

The play of Tweneboah would ultimately lead to second goal and eventual game-winner for the Hurricanes minutes later. Just into the 18th minute Tweneboah was fouled again, this time in the box by High Point’s Alex Torriero who was issued a yellow card setting up a UM penalty kick.

Freshman forward Courtney Alexander took the penalty kick and capitalized on the scoring opportunity recording the first goal of her UM career.

From that point on – led by junior keeper Lauren McAdam’s four saves – the Hurricane held onto the two goal lead for the remainder of the half despite being out shot by a total of 7-to-3.

The Panthers scored their lone goal of the match – the first goal allowed by McAdam and the Hurricanes this season – in the 61st minute when Laura Eldridge fielded a pass from teammate Amy Anzovino in the box and got off a shot by the UM keeper.

“I thought we could have played better tonight,” said head coach Tricia Taliaferro. “We were able to solve some of the attacking pressure of High Point and we created several chances in the second half, but we just were not able to finish.”

“We’ll need to do a better job of scoring on our chances on Sunday against UNCG,” she added.