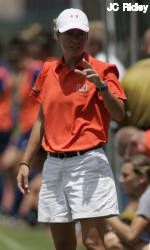 The <?xml:namespace prefix=”st1″ ns=”urn:schemas-microsoft-com:office:smarttags”?>University of Miami women’s soccer team recently wrapped up its spring workout session. Head coach Tricia Taliaferro, who enters into her fifth season with the Hurricanes next fall, recently sat down with HurricaneSports.com to shed some insight into the happening this spring.

“We played in our annual “7v7″ Tournament. Both of our varsity teams won their bracket, one of which went on to win the championship.”

“We played in the Boca Tournament at FAU where we competed against South Florida, FAU and a couple club teams. We ended the spring playing the Miami Surf, a team in the Women’s Premier Soccer League (WSPL) and a local U15 boys team.”

As a head coach, what are you looking to accomplish in the spring?

“This year, we focused on the newcomers. We had 14 freshmen last season and with the busy schedule from the time they arrived at the end of the summer until the season starts, they really didn’t have time to adjust. This spring gave them a chance to get into a routine and learn our system. I think the spring allows us to work with them more individually, the smaller groups help improve on things like technique, positioning and the smaller details we pride ourselves on.

“It was a slow start for us this spring, but I think when we had an opportunity to play more 11 versus 11 everyone found their role and discovered what was expected of them. All the pieces clicked in the last two games we played. There was a lot of improvement. I think knowledge equals confidence.”

Going into the spring workouts, was there anything in particular you as a staff wanted to work on?

“The main thing we worked on was building the level of trust among the players. Everyone knew everyone was good, but sometimes, we didn’t make that extra effort or make that run because we didn’t believe we could get it. We were out of sync at times so our focus and overall goal was to get the team on the same page. Everyone needs to know what they are capable of, what their role is, so we can put the pieces together.

“I was very impressed with how well we were able to accomplish those goals. I think it just clicked across the board. I was very excited about the level of play we were at with the end of spring.”

Last year, you said you had never seen a team as dedicated as that one was throughout the spring. That hard work paid off as the team won five more games than the year before. What has the mentality of this team been?

“The foundation for this team was laid last season. As a team they devoted themselves to the type of hard work it was going to take to make it to the next level. That has carried over into this spring.

“I don’t think the work ethic is going to change because it has become the standard of each individual and they hold each other to it. It’s now in this team’s mentality. The players really want to work on putting our best on the field.

How have the upperclassmen helped bring the underclassmen along and how has their progression been?

“I think anytime you have been through a program for a number of years the experience is going to carry over. The seniors help the other players understand our system and what we are trying to accomplish as coaches.”

“I really think Kristen Chapman made the biggest adjustment this spring. We moved her from an inside back to the outside. It allows her to be more creative, she can move forward and back.”

“We have had a lot of injuries over the past two seasons, including Sheuneen Ta, who was out for a year and half with knee injuries. Having her back has been wonderful, you can’t teach the type of creativity she has. She is a playmaker and has great vision.”

The current group of underclassmen have been extremely productive in their short time at UM. How have they improved?

“The underclassmen are not subtitle, on or off the field. I think they are a great example of the direction we are going as a program. They were able to come in and make an immediate impact and they have improved so much more over the spring. We were able to work on some things with them that we couldn’t do during the season.

“This group played better than even we expected them to. They really embraced our philosophy and saw where we are trying to take this program. Even in the fall, they were the ones who really took it up a notch for us.

“Paulelette Ricks-Chambers improved as an all around player. Before, she was just up and down the field. Now you don’t know what she’s going to do. She can dribble, shoot, and she can serve.

“Corynn Carino has done extremely well. We moved her from the outside to the inside and she has done a great job communicating and is organized.

“Lindsay Curtin has really stepped up, too. She scored at least one goal in each of our tournament dates.”

“We’ve been playing Rachael Rigamat and Rebecca Tweneboah together up top so they have time to get to know each other. Towards the end of the spring, they were scoring a bunch of goals. I think the mentality just clicked one day and they learned how to work together.”

With the return of Ta, a former 2004 All-ACC Second Team selection, along with Heinicke, who finished second on the team in goals (4) and first in assists (4), Miami should have one of the strongest midfields in the ACC. How is that going to improve this team as a whole?

“Our midfield is complimenting our backs and forwards. We are capable of doing so many different things now. If you look at Lindsay Curtin and Bryn, they were our main goal scorers from a distance in the spring. I think that makes us difficult to defend because teams will have trouble knowing which way we can attack.

“It’s not going to be just one person scoring goals. Teams are going to have to pay attention to both Rachael and Becky. If it’s not them scoring then I believe our midfield is going to be there because they are great long servers and they can shoot

With the spring now complete, what do you expect from you players between now and when they report back in August?

“This team has always done a good job of trying to play when they are away from school, whether it be with a club team back home or playing in some type of league. The ones that don’t have that opportunity to play, or the ones that go to summer school,  come back as a group and work out together.

“They know that they need to stay in shape because we’ve stressed that we don’t want to have to worry about conditioning when they officially report back in August.”

Wrapping things up with a quick look ahead, what are some foreseeable goals for the upcoming season?

“The expectations are to qualify for the ACC Tournament and make the NCAA Tournament.  I don’t think we are far from that goal. We were able to accomplish a lot last season playing a lot of true freshman and underclassmen along with missing one of our top playmakers, Sheuneen.