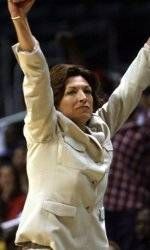 CORAL GABLES, Fla. – Head coach Katie Meier has announced the signing of Monroe Community College All-American Maurita Reid (Queens, N.Y) to a National Letter of Intent to play at the University of Miami beginning next fall.

Recruited by some of the nation’s top programs, Reid turned down the likes of national powerhouses such as Tennessee, Baylor and Rutgers to attend Miami.

In the NJCAA Division I Championship game she followed up a 35-point effort in the semifinals with an 18-point, 10-rebound, six-steal outing in a 76-64 victory over Odessa College. Hitting three three-pointers, she scored 11 points in the final minutes against Odessa to seal the championship for MCC enroute to being named the Tournament MVP.

Reid will reunite with former MCC teammate Renee Taylor in the UM backcourt. Taylor played alongside Reid with the Lady Tribunes during the 2004-05 season before transferring to Miami. In her first season with the Hurricanes, Taylor finished sixth in the ACC in scoring (15.6 ppg) and was named an All-ACC Honorable Mention selection.