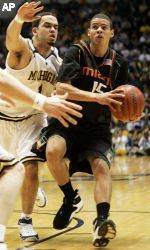 Michigan and Old Dominion will meet for the first time Tuesday night at Madison Square Garden in New York. The Monarchs won at Hofstra, 61-51 Tuesday night.

Miami went on a 9-2 run to cut Michigan’s lead to 60-55 with 3:53 to play. But Harris, who hit the game-winning 3-pointer at the buzzer in Monday’s double-overtime win over Notre Dame, answered with a 3 just 30 seconds later to stop the rally.

Michigan was 21-for-22 from the free-throw line and made all six of its attempts in the last 3 minutes.

The Wolverines made six of their first eight shots to open the game and led by as many as 11 before the Hurricanes began closing the gap.

Hite’s layup cut Michigan’s lead to 31-29 with 5 minutes left in the first half, but the Wolverines outscored Miami 7-0 the rest of the way to take a 38-29 lead at halftime.

Michigan’s last trip to New York ended with the 2004 NIT title, the third in school history. The Wolverines are 6-1 in the NIT semifinals and finals.

Graham Brown had 10 rebounds for the Wolverines, and Raymond Hicks added 12 points for Miami.