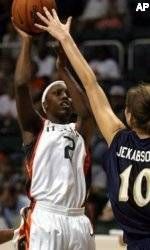 Heading into the game just 15 points behind Rivera, who recorded 2,358 career points from 1984-88, James moved passed the UM Hall of Famer at the 13:50 mark of the second half, scoring off a steal and pass from teammate Amy Audibert to become Miami’s all-time leading scorer in men’s or women’s basketball.

James’ impressive accomplishment helped lift the Hurricanes (17-12) over the Golden Panthers (19-13) to give Miami it’s first postseason victory since the 2001 WNIT.

As a team, Miami hit a season-high 14 three-point attempts, shooting 53.8 percent from beyond the arc while four UM starters scored double figures.

Miami, led by two Melissa Knight three-pointers, responded with a 14-4 run over the next two-and-a-half minutes to go up 69-57 with just over 10 minutes remaining.

The Golden Panthers cut the UM lead to eight at 71-63 with 8:27 left to play, but, scoring on the next possession, Miami held off the late run by not allowing FIU back within 10 points of the lead in the victory.

James, who recorded the 15th 30-point game of her career in the record-breaking performance, also led the Hurricanes with nine rebounds while adding five assists and five steals.

FIU’s Lasma Jekabsone, one of four FIU to score double figures, led the Golden Panthers with 31 points, hitting 10-of-16 shots from the field.

Renee Taylor scored 19 points and dished out 10 assists with just one turnover in the UM win.

Knight finished with 14 points on the night, hitting 4-of-5 three-point attempts which ranks as the second highest single-game three-point percentage (.800) in school history.

With the win, the Hurricanes advance to the Second Round of the 2006 WNIT where they will face ACC rival Virginia Wednesday at 7 p.m. in Charlottesville, Va.