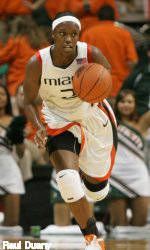 Hurricanes Heading to the ACC Tournament

A Quick Look at Georgia Tech

Head coach MaChelle Joseph and the Yellow Jackets finished the regular season with an overall record of 13-14 and a 2-12 record in league play.

Georgia Tech boasts one of the league’s best defenses, limiting opponents to just 59.7 points per game and average 7.0 more rebounds per game than opponents.

The Hurricanes and Yellow Jackets will meet for the second time in as many games Thursday in what will mark the third meeting this season and the eighth meeting all-time between the two teams.

After downing Tech 90-85 in a double-overtime thriller last Sunday in Coral Gables, Miami leads the all-time series at 6-1 and has won each of the last three contests dating back to last year’s ACC Tournament meeting.

In that first-round match-up, Tamara James got off a shot underneath the UM basket as time expired to down Georgia Tech 60-58 to help UM advance to the second round.

Miami at the ACC Tournament

This will mark UM’s second appearance at the ACC Tournament. Last season, the Hurricanes, playing as the No. 9 seed, downed No. 8 seed Georgia Tech 60-58 in the first round on a last second shot by Tamara James. Miami then fell 64-57 to top-seeded North Carolina in the quarterfinals.

The winner of the Miami-Georgia Tech game will advance to Friday’s quarterfinals where they will No. 3 seed Maryland, who finished the regular season with a 12-2 record in ACC play and a 26-3 overall record. The quarterfinal game will be televised live on the ACC Regional Sports Network (Fox Sports Florida, Fox Sports South, Comcast Sports Net, New England Sports Network).