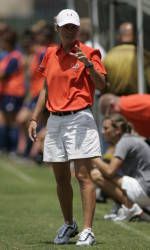 Head Coach Tricia Taliaferro Serving as an Assistant on U.S. U-21 National Team

CORAL GABLES, Fla. – University of Miami head women’s soccer coach Tricia Taliaferro is currently serving as an assistant coach with the U.S. Under-21 National Team, who are in the middle of a week-long, three-match trip in the United Kingdom.

Taliaferro, who wrapped up her fourth season with the Hurricanes in the fall of 2005, and the U.S. team will play a yet-to-be finalized top division women’s club in its first match in London before taking a quick trip up to Scotland to play the Scotland Women’s National Team on Wed., Feb. 15 in Perth.

The U.S. team will then travel back down to London for a final match on Friday, Feb. 17 against England’s U-21 side.

Taliaferro’s appointment to the U-21 staff adds to her already impressive U.S. Soccer resume. She has previously served as an assistant with the U.S. U-15, U-16 and U-17 programs and, most recently, was selected to serves as an assistant at the 2004 U.S. Soccer Girls Olympic Development Program Thanksgiving InterRegional.