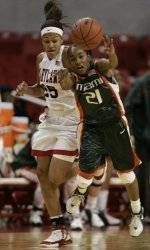 COLLEGE PARK, Md. (AP) – Shay Doron scored 26 points and capped a late run that enabled No. 6 Maryland to pull away to its sixth straight victory, 88-77 over Miami on Wednesday night.

Laura Harper contributed 19 points and nine rebounds, and Crystal Langhorne had 10 points and 12 rebounds for the Terrapins, whose six-game winning streak in the Atlantic Coast Conference is their longest since a 10-game run in 1991-92.

The Terrapins led 67-66 before Coleman made two free throws to spark an 8-0 run that made it 75-66 with 3:58 left. Doron ended the spree with her fourth 3-pointer in four tries.

Renee Taylor scored 21 points on 8-for-27 shooting, and Tamara James had 16 for the Hurricanes (14-7, 4-4). James, a senior forward who reached double figures in her 51st consecutive game, moved into second place on the Miami career scoring list.

Held to four points before halftime, James scored five in the opening two minutes of the second half during a 16-3 run that lifted the Hurricanes into a tie at 44. Maryland regained the lead on a three-point play by Coleman, and minutes later two free throws by Harper and a basket by Jade Perry put the Terrapins up 58-52.

Miami twice got within a point before Maryland finally shook off the aggressive Hurricanes.

Doron scored 13 points, and the Terrapins outrebounded the Hurricanes 31-17 in taking a 41-28 halftime lead.

Maryland missed 10 of its first 12 shots while Miami went up 11-5. It was 13-7 before a basket by Doron sparked a 9-0 run that gave the Terrapins their first lead.

After the Hurricanes moved back in front, Maryland used a free throw by Ashleigh Newman and three straight layups to take a 23-17 lead. It was 27-24 before Doron hit a 3 and added a three-point play for a nine-point cushion.

Taylor then made successive baskets, but the Terrapins countered with an 8-0 spurt to open up a 13-point lead.