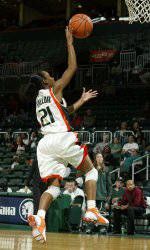 CORAL GABLES, Fla. – Despite hitting 52.2 percent from the field in the second half and a 21-point outing by junior guard Renee Taylor, Miami could not overtake ACC foe Virginia Sunday afternoon, falling 77-65 at the BankUnited Center.

After trailing the Cavaliers by one at the half, the Hurricanes (13-5, 3-2 ACC) were outscored 47-36 in the second half and 17-11 in the last five minutes of the game to suffer their second ACC loss of the season.

Taylor hit a school record tying 10-of-10 free throw attempts while adding six assists and two steals in the loss.

Down by two at 33-31 just over a minute into the second half, the Hurricanes put together an 11-4 run, highlighted by seven points by senior forward Tamara James to take a five-point 42-37 lead with 15:45 left to play.

James would finish with 15 points marking her 100th career game with 10 or more points.

Over the next five-and-a-half minutes Virginia answered with a 15-2 run, which included two three’s by Brenna McGuire as part of her career-high 22 points, to go up by eight at 52-44.

Miami cut the UVa lead to four with 7:19 remaining, but could not overtake the Cavaliers, eventually falling 77-65.

The Hurricanes trailed 30-29 at the half after shooting just 32.1 percent from the field.

James, who also was perfect on all five attempts from the free throw line, recorded a team-high nine rebounds for UM.

The Hurricanes will return to action Thursday, traveling to Raleigh, N.C. to face ACC foe NC State at 7 p.m.