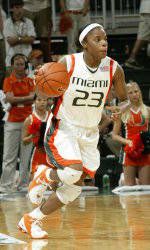 Hurricanes Take On No. 5 UNC Monday in Televised ACC Match-Up

A Quick Look at North Carolina Hall of Fame head coach Sylvia Hatchell and the fifth-ranked Tar Heels are off to a 14-0 start with wins over three top-20 teams.

Latta ranks second in the ACC in scoring (17.4 ppg) and third in assists (6.21 apg). Larkins is shooting an impressive 67.0 from the floor which is good for second in the league.

The Series Monday’s game will mark the eighth meeting between the Hurricanes and Tar Heels. The Tar Heels, who have won each of the last two games, both of which occurred last season, hold a 5-2 series edge.

In the last meeting (3/5/05) UNC’s Ivory Latta scored 19 points and hit the go-ahead three-pointer to help fourth-ranked North Carolina avoid an upset with a 64-57 win over the Hurricanes in the ACC Atlantic Coast Conference tournament quarterfinals.

Miami Hurricane women’s basketball fans will have the opportunity to collect player trading cards during all home games. The first 200 fans in attendance at each game will receive the cards, which will feature a different player each game during the 2005-06 including Monday with junior guard Renee Taylor.

Tickets Tickets are just $5 dollars for adults and $3 dollars for children and senior citizens. To purchase tickets or for more information please call the Hurricane Ticket Office at 1-800-GO-CANES or PURCHASE ONLINE at hurricanesports.com.