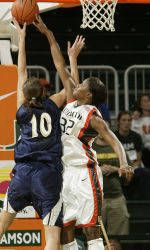 Hurricanes Tip Off with Hartford Saturday at the BankUnited Center

The Hartford Hawks With back-to-back wins over Manhattan and at Fairfield, Hartford is 6-1 on the year with their only loss coming Dec. 1 at sixth-ranked UConn. Following the loss to the Huskies, the Hawks have bounced back to outscore their last two opponents by an average of 75-to-50.5. Hartford is led by sophomore forward-center Danielle Hood’s 12.1 points per game followed by senior guard Erika Messam (9.9 ppg) and freshman forward Erica Beverly, who is nearly averaging a double-double with 9.9 points and 8.9 rebounds per game.The Series Saturday’s game will mark just the second meeting between the Hurricanes and the Hawks. Hartford downed Miami 63-53 last season in Hartford in the only previous meeting. Despite a 30-point outing by junior Tamara James, Miami could not overcome a 17-of-64 performance from the field to fall in West Hartford, 63-53, last season at the Reich Family Pavilion. James’ 30 points led all scorers, but proved to be the Hurricanes, only offensive showing as only six UM players recorded points on the night. Hartford’s Danielle Wexler led the Hawks with 21 points, going 5-of-8 from behind the three point line.What to Watch For Miami is 120-71 (.628) all-time against non-conference opponents…The Hurricanes are 31-12 (.721) in home games at the BankUnited Center (formerly known as The Convocation Center…The Hurricanes have held the last three opponents to an average of just 57.3 points per game…Senior All-America candidate Tamara James has scored in double figures in 38-straight games…Miami has only trialed at the half in one game this season.Game Promotions Miami Hurricane women’s basketball fans will have the opportunity to collect player trading cards during all home games. The first 200 fans in attendance at each game will receive the cards, which will feature a different player each game during the 2005-06 including Saturday with freshman center Brittany Denson.. Tickets Tickets are just $5 dollars for adults and $3 dollars for children and senior citizens. To purchase tickets or for more information please call the Hurricane Ticket Office at 1-800-GO-CANES or PURCHASE ONLINE at hurricanesports.com.