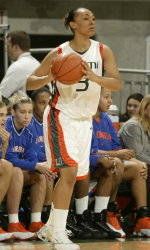 Tournament Headquarters Check out the official tournament webpage HERE complete with rosters, stats and information on all four tournament teams.The Game The Hurricanes take to the court for the second time this season Friday night hosting Bradley at 7 p.m. at the BankUnited Center. The game will be the second in the UM Thanksgiving Tournament, a two-day, four-team tournament also featuring Duquesne and Oakland who tip-off Friday at 5 p.m. The winner of each game Friday will move on to play in Saturday’s championship game at 8 p.m. while the losers play in the consolation game Saturday at 6 p.m.Radio, Television and Internet BroadcastFriday’s game will be broadcast live on WVUM (90.5 FM) and can also be HEARD LIVE on hurricanesports.com, which will also feature live scoring and stats.The Hurricanes The Hurricanes officially opened the 2005-06 season at home last Friday with a 72-51 win over Samford at the newly renamed BankUnited Center. The game also marked the debut of first-year head coach Katie Meier, who took over the Hurricane program in April of 2005.

Miami’s defensive efforts stifled the Bulldogs in the season-opener, holding Samford to just 35 percent shooting from the field while forcing 25 turnovers.

All but one UM starter in the opener scored in double figures, led by National Player of the Year candidate Tamara James’ 17-point outing. James also surpassed Jeannie Hebert (1988-92) to move into third place all-time in career scoring at UM in her 31st consecutive game with double-digit points.

Junior college transfer Renee Taylor and fifth-year senior Melissa Knight each recorded 14 points. The game mark Knight’s return to the court after missing the entire 2004-05 season with an ACL injury.

Junior Imani Dhahabu recorded her second career double-double with 10 points and 12 rebounds, 10 of which came in the second half, against the Bulldogs.

The Braves The Braves are 2-0 on the year coming off a 79-71 double-overtime win over Valparaiso Monday night in Peoria.

Bradley has dominated opponents on the boards early this season, out-rebounding opponents by an average of 15 rebounds per game.

A large portion of Bradley’s success on the glass has come from junior forward Amy Peters, who leads the team with 11 rebounds per game. Peters has averaged a double-double this season turning in 13 points per game.

The Braves’ most consistent scoring threat has been junior guard Jen Brown who has averaged 13. 5 points per game. Freshman guard Kelly Krumwiede leads the team with 15 points per game highlighted by a 22-point effort off the bench in the season opener against Illinois-Chicago.

The Series Friday’s game will mark just the second meeting all-time between the Hurricanes and the Braves. The only previous meeting also occurred during a Thanksgiving tournament as Miami knocked off Bradley, 70-52, on Nov. 29, 2003 at the Hilton Concord Thanksgiving Classic in Moraga, Calif.What to Watch For— UM has opened the season 2-0 just 16 times in 33 seasons.— Only two out of seven first-year UM head coaches (Isabella Hutchinson, 1977-78 and Ferne Labati, 1988-89) have started their Miami careers 2-0.— Miami is 115-70 against non-conference opponents.— Miami is 15-2 over the past five seasons in regular season tournaments and invitationals.— Tamara James needs just one rebound to move into sole possession of 10th place and four to move into ninth place all-time at UM.— James needs five free throws to move into fourth place all-time all-time at UM in free throws made.TicketsTickets are just $5 dollars for adults and $3 dollars for children and senior citizens. To purchase tickets or for more information please call the Hurricane Ticket Office at 1-800-GO-CANES or PURCHASE ONLINE at hurricanesports.com.