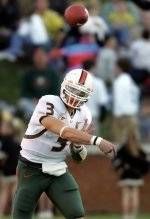 Coral Gables, Fla (www.hurricanesports.com) — – Hurricane fans can cast their votes for University of Miami quarterback Kyle Wright for the Cingular Wireless/ABC Sports All-America Player of the Week, the only major college football honor determined exclusively by fans. Wright was nominated for the first time in his career after completing 17 of 27 passes for 319 yards and five touchdowns – which ties the school record – in the Hurricanes’ 47 – 17 win over Wake Forest.

Wright is one of four candidates for the All-America Player of the Week, who are selected by a panel of ABC Sports and ESPN college football analysts. The other finalists are: Ohio State linebacker A.J. Hawk, who was nominated after tying a team-high of eight tackles, one sack, one forced-fumble and a blocked punt that he returned for a touchdown. Hawk helped limit Northwestern’s high-powered offense to a mere 251 yards in the Buckeyes’ 48 – 7 win; ULCA quarterback Drew Olson, who was nominated for the second time this season after completing 22 of 27 passes for 510 yards and six touchdowns – setting a UCLA season touchdown pass record with 30 – in the Bruins’ 45 – 35 win of Arizona State; and Auburn University running back Kenny Irons, who was nominated for the award for the first time in his career after 37 carries for 179 rushing yards and two touchdowns in the Tigers’ 31 – 30 win over University of Georgia.

Who will be this week’s winner now rests solely in the hands of college football fans nationwide. Fans have until Wednesday, November 16 at 11:59 p.m. EST to submit their votes via wireless text messaging.* The winner will be announced November 17 in the first half of the ESPN Thursday Night College Football Game between Miami and Wake Forest. Fans can learn more about this week’s nominees online at www.abcsportsallamerica.com or at www.cingularallamerica.com.

Here’s how fans can register to vote for the Cingular/ABC Sports All-America Player of the Week this week and every week throughout the 2005 season:

Text “VOTE” to “87654” on your wireless phoneFollow the prompt to vote for your All-America selectionCingular/ABC Sports Player of the Week candidates will be automatically sent out via text messaging each week.

Each time fans vote, they are entered into a sweepstakes to win a trip to the Bowl Championship Series game of their choice. Fans can vote as often as they like.

*Other wireless carriers must opt-in for their subscribers to participate

Cingular Wireless is the largest wireless carrier in the United States, serving 52.3 million customers. Cingular, a joint venture between SBC Communications Inc. (NYSE: SBC) and BellSouth Corporation (NYSE: BLS), has the largest digital voice and data network in the nation — the ALLOVER (SM) network — and the largest mobile-to-mobile community of any national wireless carrier. Cingular is the only U.S. wireless carrier to offer Rollover (SM), the wireless plan that lets customers keep their unused monthly minutes. Details of the company are available at http://www.cingular.com/ . Get Cingular Wireless press releases e-mailed to you automatically. Sign up at http://www.cingular.com/newsroom .