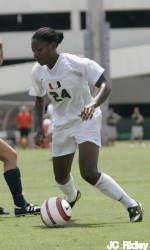 Hurricanes on the Road at Duke and Wake Forest

CORAL GABLES, Fla. – The University of Miami women’s soccer team will wrap up the 2005 regular season this weekend with a pair of games in the state of North Carolina playing at 10th-ranked Duke Friday night at 7 p.m. and at Wake Forest Sunday morning at 10:30 a.m.

Having won three of their last four games, the Hurricanes head into the weekend with an overall record of 8-9-1 and a 2-6-0 mark in ACC play.

UM is led by redshirt sophomore Rebecca Tweneboah’s team-high six goals and 14 points. Tweneboah has been responsible for four of UM’s last five goals, including both goals in the 2-1 win over UCF, and has scored in three of the last four games.

Freshman midfielder Bryn Heinicke ranks second on the team with four goals on the year and tops the UM roster in assists (4) and shots (40).

Duke boasts an overall mark of 11-4-1 with a 5-4-0 record in ACC play. Friday’s game will mark just the second meeting between the Hurricanes and the Blue Devils, who won the only previous contest – a 4-1 decision last season in Coral Gables.

Wake Forest, who currently holds an overall record of 8-6-1 with a 3-5-0 record in league play, will take on ACC-leading and third-ranked North Carolina Friday night. The Demon Deacons won the only previous game played between the ACC opponents, downing the Hurricanes 5-0 last season in Winston-Salem.