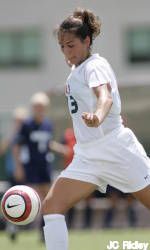 Hurricanes Fall 3-1 to No. 6 Florida State

CORAL GABLES, Fla. – The University of Miami women’s soccer team could not overcome a three-goal deficit as they fell to in-state ACC rival and sixth-ranked Florida State, 3-1, Sunday afternoon before a UM school-record crowd of 893 fans at Cobb Stadium.

Freshman midfielder Bryn Heinicke netted Miami’s (7-9-1, 2-6-0 ACC) lone goal of the afternoon, scoring in the 65th minute, but Hurricanes could not bounce back after allowing a pair of first half goals and a goal early in the second by FSU (12-2-0, 5-2-0 ACC).

Florida State struck early when Holly Petltzer ran down a ball from teammate Kristen va de Ven in the box to beat starting junior keeper Alex Alford in the short side of the net in the eighth minute of play.

Up 1-0, FSU found the back of the Hurricane net once again just three minutes later when Kelly Rowland scored what would eventually be the game-clincher with a header just in front of the net on a Teresa River corner kick.

Coming out of the half, the Seminoles added their third and final goal of the day in the 49th minute on an India Trotter to van de Ven score.

Heinicke then scored in the 65th minute, knocking down a pass from sophomore midfielder Lindsay Curtin and firing off a shot from 20 yards out past FSU keeper Ali Mims to put the score at 3-1, where it would ultimately end.

Heinicke led the UM roster recording three of UM’s five shots on the day. Sophomore keeper Lauren McAdam picked up three saves after replacing Alford in the 21st minute as the duo faced a total of 17 Florida State shots.

Miami will return to action Tuesday as they break from conference play to take on in-state foe UCF in Orlando at 7 p.m.