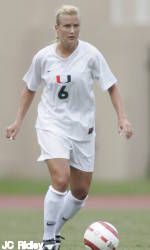 CORAL GABLES, Fla. – Scoring a goal in each half of play, the University of Miami women’s soccer broke out of a six-game losing streak Sunday with a 2-0 win over ACC foe Maryland at Cobb Stadium.

The Hurricanes (6-8-1, 1-5-0 ACC) ended a five-game scoreless streak in the victory when junior midfielder Kelly Pflugner netted the eventual game-winner in the second minute of play against the Terrapins (3-8-2, 1-3-1 ACC).

Pflugner led all players with four shots, followed by freshman midfielder Bryn Heinicke, who also was credited with an assist on the day, and Rachael Rigamat with three shots each.

Junior keeper Alex Alford picked up her first victory of the year in her second game in net, posting three saves as the Hurricane defensive efforts limited Maryland to just four shots on goal.

Pflugner put the Hurricanes up in the early moments of the game when she won a ball just inside the top of the box and chipped a shot over Maryland keeper Nikki Resnick and into the Terrapin net at the game’s 1:52 mark.

Miami added their second and final goal of the day in the second half when Heinicke fed a ball down the right side of the field over the Maryland defense, who was playing a man down following a red card ejection of Danielle Malagari in the 50th minute, to freshman forward Paulelett Ricks-Chambers. Ricks-Chambers footed the Heinicke pass and crossed it back into the middle of the box where redshirt sophomore Rebecca Tweneboah fired a one-timer past Resnick into the net.

Miami will take to Clemson, S.C. Wednesday to take on ACC counterpart Clemson at 7 p.m. before returning to Coral Gables Sunday to face in-state conference rival Florida State at 12 noon. Sunday’s game against FSU will be televised live on SUN Sports.