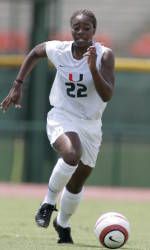 The Hurricanes head into Sunday’s game with an overall record of 5-8-1 and an 0-5-0 mark in ACC play. Miami, who has fallen to three top 10 teams in their last four games, will attempt to snap a tough six-game slide Sunday against the Terrapins, who are 3-7-2 overall and 1-2-1 in ACC games.

Heinicke tops the UM roster in nearly every category, recording the most points (9), shots (32), shots on goal (15), game-winning goals (2) and assists (3). Heinicke is tied with Ricks-Chambers for the Hurricane lead in goals with three.

Rigamat ranks second on the team shots (25) and is tied for second with Tweneboah with 11 shots on goal. Rigamat, who has led the Hurricanes with seven shots over the last three games, and Tweneboah, along with freshman forward Tessa Lennala, rank second on the team with two goals each.

The game will also mark a notable one for fourth-year head coach Tricia Taliaferro who will once again be united with her alma mater in a now annual ACC event. Taliaferro was a four-year starter for the Terps from 1992-95 under legendary head coach April Heinrichs. Last season she guided the Hurricanes to a 2-1 win over her former school in the first meeting between the ACC foes to land UM it’s first ACC victory.

Francis is also tied with senior midfielder Mallory Mahar for the Terp lead in assists with three.

Tickets are just $5 dollars for adults and $3 dollars for children and senior citizens. For more information, please contact the Hurricane Ticket Office at 1-800-GO-CANES.