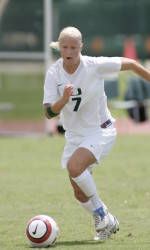 BLOOMINGTON, Ind. – Freshman forward Tessa Lennala netted the game-winner in the 82nd minute to lead the University of Miami women’s soccer team past Indiana, 2-1, Friday night on the first day of play at the Hoosier Classic at Armstrong Field.

With just over eight minutes left in regulation and the score tied at one-all, Lennala found the back of the net off a deflected shot by teammate Rachael Rigamat past Indiana (1-3-1) keeper Stacey Van Boxmeer to give the Hurricanes (4-1) their third-straight victory.

Miami was out-shot by an aggressive IU team by a total of 15-to-9, but behind seven saves by goalkeeper Lauren McAdam, were able to hold the Hoosiers to just one goal on the evening.

The Hurricanes and Hoosiers battled through over 30 minutes of scoreless play until UM defender Kristen Chapman scored following a UM corner kick in the 35th minute to give Miami a 1-0 lead that would carry into the half.

Indiana’s Kristen Zemijewski teamed up with teammates Suzie Teixeira and Molly Beckwith for the IU equalizer in the 71st minute as Zemejewski scored on a deflection by Teixeira past McAdam.

Lennala scored the game-winner just over ten minutes later, scoring in the middle of the net past Van Boxmeer on a deflection from Rigamat, who had fired off a shot from over 25 yards out, to hand the Hurricanes their third win in the last seven days and their first road victory of the season.

The Hurricanes return Sunday for the final day of the Hoosier Classic, taking on 14th-ranked Marquette, who downed Xavier, 2-1, earlier Friday, at 11 a.m. (EST).