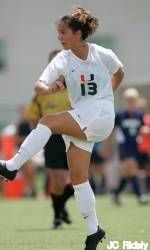 CORAL GABLES, Fla. – Freshman midfielder Bryn Heinicke scored a pair of goals, including the game-winner in the 79th minute to lead the University of Miami women’s soccer team past in-state rival Florida Atlantic, 2-1, Friday afternoon at Cobb Stadium in the opening game of the 2005 Miami Tournament.

With the scored tied at one-all, Heinicke sealed the game for the Hurricanes (2-1) with just under 12 minutes to play when she fired off a shot from over 15 yards out over the top of FAU (2-1) keeper Jessica Badders.

The Hurricanes and Owls fought back and forth offensively all afternoon combining for 27 shots, including a total of 13 attempts on goal on the day.

“I was very pleased with our effort out there today,” said UM head coach Tricia Taliaferro. “We were creating shots and really looked organized. It was nice to see how well our team responded, coming out with an effort like this after the loss to Stetson earlier this week.”

After nine minutes of scoreless play, Miami freshman forward Paulelett Ricks-Chambers drew a penalty kick for the Hurricanes after being tackled just inside the box. Heinicke took the kick for UM and sent a shot to the left of Badders to give the Hurricanes their first goal of the afternoon.

FAU responded just over 10 minutes later when Susanna Lehtinen connected on a cross from teammate Ashley Mannario to score past UM sophomore keeper Lauren McAdam in the 21st minute.

After heading into the half with the scored knotted at one-all, the Hurricanes and Owls returned to fight for nearly 33 minutes in the second before Heinicke’s game-winning, second goal of the day in the 79th minute.

The Hurricanes will return to action Sunday, taking on No. 14 Princeton in the final day of the 2005 Miami Tournament.