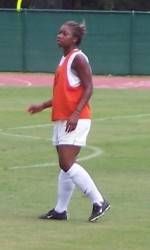 CORAL GABLES, Fla. – The 2005 edition of the University of Miami women’s soccer team held their first official team practice of the preseason Thursday with a pair of two-hour training sessions at Cobb Stadium.

Battling the intense South Florida heat and humidity, fourth-year head coach Tricia Taliaferro and the Hurricanes kicked off their preseason training in the morning with a two-hour workout before returning for an equally challenging session in the afternoon.

Entering her fourth season at the helm of the Hurricane soccer program, Taliaferro will lead what could possibly be one of the most dedicated and determined teams in UM history into their second season in the tradition-rich Atlantic Coast Conference.

“Now that most of these players have gone through a season in the ACC, they know what to expect and now know how to deal with it and what needs to be done to be successful,” said Taliaferro.

Yach is joined by fellow classmate Ashley Durkee as the two lone seniors on this year’s team and very much like 2004, in which UM fielded a team of 17 underclassmen, including seven true freshmen, the 2005 edition of the Hurricanes could once again be one of the youngest teams in the league entering the year with 15 underclassmen including nine true freshman.

“Just like last season, we are a young team again, but the core and the foundation of the team has matured,” said Taliaferro. “The work ethic, the leadership and the overall mentality of this team has improved so we are really looking forward to how that translates this season.”

That work ethic will be put to the test in 2005 as the Hurricanes look to improve on a disappointing inaugural ACC campaign in 2004, during which they posted an overall record of 3-13 and a 1-8 mark in ACC play.

“Once you go through a season like last year, it’s embarrassing for everyone,” Taliaferro said. “So now there is a shift in the mentality and you can see that with everyone on this team. Throughout the spring we would give players opportunities to do a little extra, in terms of training and conditioning, and nine times out of ten, they would choose to go a little longer or harder because they want to be successful.”

Miami returns a pair of goalkeepers in junior Alex Alford and sophomore Lauren McAdam will compete for time in net in 2005.

Alford, the quicker of the two keepers, played in just 11 games in 2004, fighting through an ankle injury, but has gotten more confident in net.

McAdam is one of the strongest players on the team and has made tremendous strides throughout the spring since starting in net as a true freshman last season.

The foundation of the 2005 Hurricanes could lie in the back line, composed of Durkee, sophomore Akilah Moore and junior Kristen Chapman – all three of which were voted as the team leaders this season.

Durkee, a three-year starter during her tenure at UM who played more minutes (1,458) than any other player in 2004, is fast and is one of the best one-on-one defenders on the team.

Moore, a very physical outside back, had a very productive offseason and really grasped her new role after a position change midway through the 2004 season.

Chapman has been described as the “heart and soul” of the program by coaches and is one of UM’s most consistent players.

A pair of incoming freshmen defenders in Corynn Carino and Nikki Stecich will battle for the fourth spot on the back line.

Led by all-conference selection Ta along with junior Kelly Pflugner and sophomore Lindsay Curtin, UM’s midfield has the upside to be one of the best in the conference this season.

Ta earned All-ACC Second Team accolades in 2004 despite missing the final six games of the season with an ACL injury and should return to form in 2005 as one quickest, most sophisticated players on the team.

Pflugner, who finished the 2004 season tied for second on the team in goals despite playing in just nine games, makes the transition from the back line to midfield where she should be able to make a bigger impact.

After stepping up as a starter during her freshman season, Curtin returns to the midfield more confident and more technical, especially in her passing.

Sophomore Jessica Gillman is also thrown into the mix, but like Ta, will have bounce back from an ACL injury to return to top form.

The forward position has all the potential to be the most improved area on the field for UM in 2005. Along With top returnees, Yach, sophomore Cynthia Dongo and junior Julie Brooks, the Hurricanes bring an outstanding incoming group of scorers to make it one of the deepest, most competitive positions on the team.

“From a coaching standpoint this season is exciting because we are two and sometimes three players deep at the forward position. That’s going to generate a lot of competition between each spot and ultimately raise the level of play of the entire team.”

“We do have a lot of newcomers, but I hold high standards for all of these players coming back from last season. I think every single player on this team has the opportunity to become a starter. My philosophy has always been that if we are going to be a part of this team, you are going to have the chance to earn a starting position, but it’s ultimately going to be up to you.”

Yach, Miami’s main scoring threat, enters her senior campaign on pace to surpass former Hurricane and former teammate Britney Butcher as UM’s all-time leading goal scorer. Although the Carrollton,Texas native led the Hurricanes in scoring with four goals last year, Taliaferro will look for her to return to top form such as in 2002 and 2003 when she scored nine goals each season.

Dongo is one of the fastest players on the team with the upside to be a dangerous threat on the outside. Coming off a season-ending ACL injury, she has made dramatic improvements and will make an impact in 2005.

Brooks took the second-most shots (21) on the team in 2004 and is a very tactical player with great field vision.

A strong group of freshman, in Paulelette Ricks-Chambers, Tessa Lennala and Val Blanco will enter the mix, along with redshirt sophomore Rebecca Tweneboah, who transfers from 2004 National Championship winners, Notre Dame.

Taliaferro and the Hurricanes will open the 2005 season Sunday, August 28 hosting Monmouth at Cobb Stadium at 12 noon.

Single game tickets are just $5 dollars for adults and $3 dollars for children and senior citizens. Fans can purchase the UM Family Plan and receive admission to all Hurricane soccer and volleyball home matches for two (2) adults and three (3) children for just $50 dollars.

For ticket information, please contact the Hurricane Ticket Office at 1-800-GO-CANES or on-line at www.hurricanesports.com.