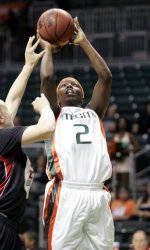 The Hurricanes (3-5) will host in-state rival UCF Monday evening in Coral Gables at 7 p.m. at the Convocation Center. Monday’s game will be broadcast live on radio on WVUM (90.5 FM) and can also be heard live on hurricanesports.com, which will also feature livestats. Tickets are just $5 for adults and $3 for children and seniors and can be purchased through the Hurricane Ticket Office by calling 1-800-GO-CANES or on hurricansports.com.

The Hurricanes
Miami returns to Coral Gables for the first time in 21 days following a six-game road trip during which UM posted an overall record of 1-5 to take on in-state rival UCF. The Hurricanes look to snap a three-game losing streak, last falling to No. 12 Texas Tech, 109-49, December 6 in Lubbock, Texas. The Hurricanes have won their only two contests at home this season, and have won six straight at the Convocation Center dating back to last season. Junior All-America candidate Tamara James leads the Hurricanes and tops the ACC in scoring, averaging 21 points per game this season. James has led the Hurricanes in seven-of-eight games this season and needs just two points to move into 10th place all-time at UM in scoring. Senior Yalonda McCormick enters Monday’s game averaging 5.75 assists per game which also leads the ACC while freshman Albrey Grimsley looks to continue to play well, averaging over 13 points over the last two games.

The Golden Knights
Sixth-year head coach Gail Striegler and the Golden Knights enter Monday’s game with an overall record of 2-4 after falling to Lipscomb, 67-60, December 4 in their last outing. UCF has dropped four of their last five games, last winning against Belmont December 2 in Orlando. The Golden Knights have stifled opponents defensively this season, holding teams to just57.5 points per game and have only allowed more than 60 points twice. Sophomore Francine Houston leads UCF in scoring, averaging 11.8 points per game. Houston, who averages just over 20 minutes a game, broke into the UCF lineup for the first time this season against Lipscomb after scoring a season-high 29 points in the win over Belmont. Junior Shelby Weber leads UCF on the glass this season, averaging 5.7 rebounds per game.