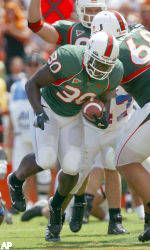 MIAMI – After struggling to pick up the offense, Devin Hester was moved to a reserve role on defense.

Good thing he still plays special teams for No. 4 Miami.

Hester, the Hurricanes’ most electrifying player, returned two punts for scores to lead Miami to a 48-0 victory over Louisiana Tech on Saturday.

He also blocked a field goal against Florida State last week that allowed Miami (2-0) to tie the game in regulation.

“You don’t have to be too smart to figure out he’s going to be pretty special,” coach Larry Coker said. “He’s so fast, so explosive. He makes fast people look slow.”

He ran back one punt 51 yards to give Miami a 24-0 lead in the second quarter. He sliced between two defenders, almost fell to the ground, and then cut left and ran away from everyone.

Hester, who finished third in the 60 meters at the Big East indoor track and field championships this year, wasn’t done. He returned another punt 92 yards in the fourth period. He started right, cut left and had just punter Matt Butler between him and the end zone.

Talk about a mismatch.

Hester scored easily and was flagged for taunting when he held the ball out at the 20-yard line.

“I just want to go out and make plays,” said Hester, a sophomore who caught four passes last season before moving to cornerback this spring. “It’s doesn’t matter if it’s on offense, defense or special teams.”

The Hurricanes, coming off a huge win against the Seminoles, certainly didn’t have a letdown.

This was a beat down.

Tyrone Moss had 69 yards on seven carries and scored twice in the first quarter. Frank Gore ran 12 times for 61 yards and scored a touchdown early in the third quarter before sitting out much of the second half. And the defense, which held Florida State to 165 yards, was even more impressive against Louisiana Tech (2-1).

“We rushed them a lot, we blitzed them a lot,” cornerback Antrel Rolle said. “Our defensive line was in their backfield all night.”

Ryan Moats, the nation’s leading rusher who gained 257 yards in each of his first two games, carried 14 times for 81 yards and fumbled once. He had 70 yards on seven attempts in the first quarter, but did little after a few adjustments by the Hurricanes.

“He wasn’t going to beat us,” Coker said.

Moats walked down the bench shaking hands of teammates early in the third quarter. He was done for the day, and so was Louisiana Tech.

“They’re great. They always have a great defense,” Moats said. “They have good speed, good size, that’s Miami for you. I love playing against that defense.”

He scrambled on nearly every play. He was 3-of-10 for 15 yards, was sacked five times and lost 30 yards on 10 carries. He left the game with a shoulder injury.

Louisiana Tech had one big play, when backup quarterback Matt Kubik connected with Johnathan Holland for 79 yards. But Brad Oestriecher missed a 30-yard field goal that would have avoided the shutout, which was Miami’s first since beating Syracuse 59-0 in 2001.

It was the first time Tech has been shut out since 1993, breaking a streak of 130 games in which they scored points.

The Hurricanes scored four touchdowns and led 34-0 at halftime. Gore’s 2-yard TD run on the opening drive of the third quarter sent most starters – for both teams – to the bench.

Brock Berlin was 10-of-14 for 122 yards, but also made several mistakes. His first pass of the game was intercepted, and on Miami’s next drive, he overthrew a wide open Ryan Moore in the end zone.

The loudest cheer of the game came when redshirt freshman Kyle Wright entered late in the third quarter. He was 1-of-3 for 6 yards and was sacked twice.

For the most part, Berlin looked much better.

He drove the Hurricanes 38 yards for a touchdown just before halftime, hitting Darnell Jenkins for an 11-yard score with 12 seconds to play.

Tanard Davis stripped the ball from Eric Newman on the ensuing kickoff, and Marcus Maxey recovered to set up Jon Peattie’s 36-yard field goal as time expired to make it 34-0.