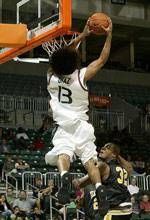 ON IPFW:
IPFW enters its match-up with Miami with a record of 2-9 following a 76-63 road loss to West Virginia on December 28. The Mastodon’s have dropped three consecutive games.

IPFW, which competes as an independent, has been led this season by junior center David Simon who leads the team in both scoring (14.1 ppg), rebounding (6.8 rpg) and field goal percentage (.543). Simon recorded 17 points and 10 rebounds against the Mountaineers.

The only other Mastodon averaging in double-figures in scoring is junior guard Terry Collins (11.9 ppg).

THE SERIES:
Miami and IPFW are meeting for the first time.

UP NEXT:
Following the IPFW game the Hurricanes return to action on January 3rd when they host Savannah State beginning at 7:30 p.m. at the Convocation Center.

TV/RADIO COVERAGE:
Miami’s game versus IPFW will not be televised. The game will be broadcast on the Hurricane Radio Network WQAM (560 AM). Joe Zagacki “The Voice of the Hurricanes” will handle the play-by-play with Josh Darrow adding analysis. Brian London will serve as studio host.

The game will also be broadcast on the University of Miami student radio network WVUM (90.5 FM). Fans can also catch the game on the web at hurricanesports.com.

ON THE COACHES:
University of Miami head coach Perry Clark is in his fourth season with the Hurricanes and 15th season overall as a collegiate head coach. Clark is 59-41 (.590) at Miami while his career record in 14 seasons stands at 244-186 (.567).

A WIN AGAINST IPFW WOULD:

LAST GAME: MIAMI 76, FAU 51
December 27, 2003
Convocation Center, Coral Gables, FL
Robert Hite poured in a career-high 26 points to lead the University of Miami to a 76-51 win over Florida Atlantic at the Convocation Center.

Eric Wilkins had 11 for Miami while All-American forward Darius Rice was held to just nine points snapping his streak of consecutive double-fiugyre scoring games at 28.

Pierre Tucker had 11 points and Jeff Hamilton had 10 for Florida Atlantic, which lost to Miami for the 16th time in 17 meetings and shot only 28.8 percent for the game.

The field goal fueled a 23-8 run which gave the Hurricanes a 59-37 lead with 9:46 remaining. Freshman guard Guillermo Diaz scored eight of his nine points and Miami’s defense forced nine Florida Atlantic turnovers during that run, which saw the Owls go scoreless for the final 3:58.

According to The Chronicle of Higher Education, the University of Miami men’s basketball program ranks third in the nation among the 117 Division I-A institutions with a 78 percent graduation rate for student-athletes who entered school from 1993-97 and earned their degrees within six years.

BEING THROWN INTO THE FIRE:

Miami relied heavenly on four of its freshmen last season. Rob Hite, Armondo Surratt, Eric Wilkins and Gary Hamilton started a combined 50 games and all averaged 16 or more minutes per game. The 50 combined freshmen starts wee the most since the 1985-86 season, UM’s first since the program was dropped in 1971, when Eric Brown (27), Dennis Burns (20), Bryan Hughes (28), Kevin Presto (28) and Mark Richardson (18) combined to start 121 games.

Members of the University of Miami men’s basketball team as well as several student-athletes from the Hurricanes’ football, women’s rowing, women’s track, women’s volleyball, men’s tennis and women’s soccer programs handed out Thanksgiving dinners to six Miami-area organizations prior to the start of the women’s basketball exhibition game versus The Tournament of Champions on November 17 at the Convocation Center.

Head coach Perry Clark and the University of Miami men’s basketball team spread some holiday cheer on Thursday with a visit to the pediatrics ward at Baptist Hospital in Miami.