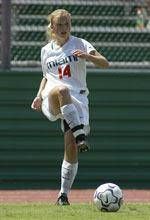 Yach was named to the All-BIG EAST second team after leading the Hurricanes in scoring the entire season. She led Miami with 21 points including nine goals and three assists.

Ta was named to the All-BIG EAST Rookie Team. She started all 19 matches and finished third in scoring for Miami with eight points on the year. She scored two goals and dished out four assists.

The Hurricanes wrapped up the season with a 9-9-1 overall record.