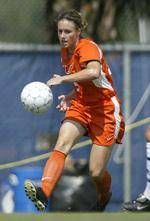 CORAL GABLES, Fla.-The University of Miami soccer team lost to Providence for the first time ever in a 1-0 overtime decision in its regular season finale Sunday afternoon in Providence, R.I.

Miami wraps up conference play in fourth place in the Northeast Division with nine points. No. 14 Connecticut wins the regular season title with 15 points, No. 19 Boston College finishes in second place with 10 points and St. John’s claims third place with nine points.

St. John’s beat Miami during the regular season to win the tie-breaker for third place.

Miami will face the No. 1 seed in the Mid-Atlantic Division No. 2 Notre Dame in the first round of the BIG EAST tournament either Nov. 1 or Nov. 2 in Notre Dame, Ind.

Both teams remained scoreless in the first two periods. PC took 14 shots in the first half compared to two shots for Miami. The Hurricanes came out and took 16 second half shots while PC took only six.

Just two minutes into overtime the Friars scored on a free kick just outside the box. Maura Robertson took the kick and scored the game-winning goal for PC.

The Hurricanes took 10 corner kicks, compared to five for the Friars.