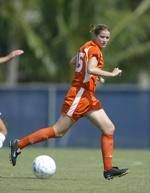 Velisek scored the winning goal in the 68th minute on a cross from Andrea Radice (Hialeah, Fla.).

The Hurricanes dominated offensively taking 28 total shots, including 13 on goal, compared to 10 total shots for JU.

“We played very well overall, we had some players really step up and contribute,” said head coach Tricia Taliaferro. “We were very organized and disciplined and we will use this win to get focused for BIG EAST play.”

Miami took the 1-0 lead at the 41 minute mark as Lindsey Yach (Carrollton, Texas) scored her fourth goal of the season on a cross from Anik Huffman (Winter Park, Fla.).

Freshman Julie Brooks (Atlanta, Ga.) scored her first goal of the season in the 82nd minute on a cross from Vonda Matthews (Broken Arrow, Okla.).

JU got on the board with five minutes remaining in the match as Ranveig Aas-Hanssen heads in a free-kick from teammate Ashley Reilly.