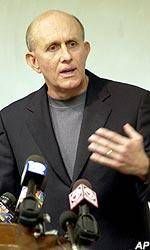 “It is great to start a new year. It is always an exciting time when the University of Miami starts the season. I think everyone asks how good are you going to be and how good do you think you can be, and until you play you just don’t know. We will certainly get a good indication Thursday night when we play a very good football team. They have some veteran players. They have a great quarterback who is statistically the best in the nation and their top receiver is back. They are a very good team and playing at home will give them a lot of excitement going into the game.”

“I think our team will be very excited. We have some young, new players. We have a new quarterback, some new offensive lineman, and new defensive ends. We have some veteran injuries we have to deal with so there will be some young faces out there. It is going to be an exciting time for us.”

On expectations of Brock Berlin, a native of Shreveport, La.:”He is not a rookie, he has been around for a while. He has been in big stadiums and big venues before. He doesn’t need to be calmed down yet, but I will talk to him about the game and let him know that he doesn’t have to go out there and win the game. He just needs to do the things to give our team the chance to win the game. He just needs to make good decisions and be efficient because we have players like Kellen Winslow and Frank Gore and other guys that are going to be important. I’ve heard people say that if Brock Berlin can perform as good as a second year Ken Dorsey then Miami is going to be pretty good, and I think that may be a fair statement. Brock seems to perform better in big situations.”

On the receiving corps“Ryan Moore has looked awfully good. He has been everything we had hoped for and has been a big playmaker for us. Kevin Beard has had the best preseason camp since he has been here and I have been real impressed with him. I think the young guys Devin Hester and Darnell Jenkins have talent and will see some playing time. Jason Gathers may not make the trip this week. You really hate to lose a senior and a player like Jason from an experience standpoint. I think we are going to end up being pretty good at receiver, to say we have an Andre Johnson, I just haven’t seen that player yet. I think Ryan Moore has better receiving skills than Andre had, but he just isn’t 230 pounds.”

On Jonathan Vilma“Jonathan is a tremendous leader for us on defense. He is the kind of guy that is a leader by example. He works extremely hard and he is tough. More than that he is a quality young man, he is very intelligent and is respected in the locker room. Right now he has been nursing a hamstring injury that has really has him disappointed.”

On the status of Frank Gore“He has looked outstanding. I made the mistake of asking him how his bad leg felt and his response was that he didn’t have a bad leg. He went through spring practice and had a great summer. He is a little stronger and has gained some weight but he still looks very lean. I am excited to see him. He will be a big key for us.”