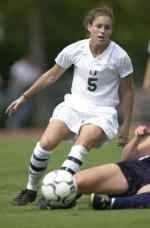 The Hurricanes had a strong outing the three 30-minute periods. Miami took seven shots on goal compared to four for UF.

“I was pleased with our overall performance today,” said head coach Tricia Taliaferro. “We came in with a set game plan and executed it very well. We will now go in and make some adjustments in preparation for the regular season.”

The two teams were scoreless after the first 30 minutes of play, with Miami taking six shots compared to only two for the Gators.

The only goal of the match came at the 47 minute mark as Amber Presnick of UF scored on a deflected ball by Miami goalkeeper Alex Alford (Atlanta, Ga.).

Miami tallied 13 total shots on the day while the Gators took 12 shots.

Freshman keeper Alford made three saves in 90 minutes of action in her first outing as a Hurricane.