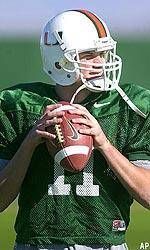 PHOENIX (AP) – The defensive strategy for both teams in the Fiesta Bowl issimple: Stop the run and dare the opponent to pass.

That lack of respect doesn’t bother either quarterback.

“That’s their game plan,” Miami’s Ken Dorsey said. “That’s how they wantto play our offense. Some teams try to take the run away, some teams try totake me away. That’s the benefit of a balanced offense.”

The No. 1 Hurricanes (12-0) will implement a similar strategy to thesecond-ranked Buckeyes (13-0) in Friday night’s Fiesta Bowl.

“If they try to take the running game away, we’ll have one-on-one coverageoutside and I like our receivers chances of coming down with the ball,”Krenzel said.

Dorsey and Krenzel are used to this by now. The two quarterbacks, who eachhave lost only once in their college careers, are targets for criticism.

“It’s one of those things where people have their opinion and they’reentitled to it,” Dorsey said. “I’m not going to try to take their opinionaway or tell them they’re wrong. I have my own opinion.”

Dorsey’s record leaves little to quarrel with despite the doubters. Hepassed for 3,073 yards and 26 touchdowns this season, completing 55.4 percentof his passes with just 10 interceptions.

And all this at a school with a pretty impressive list of quarterback alums:Jim Kelly, Bernie Kosar, Vinny Testaverde, Steve Walsh, Gino Torretta and CraigErickson.

“Kenny has been under the microscope from everybody,” offensivecoordinator Rob Chudzinski said. “If his towel was a little off to the right,everyone had things to say. He handled the pressure with tremendous class.

“Has he had a perfect year? No. He’d be the first one to tell you that. Buthe has won 12 games and put us in position to win a second straight nationalchampionship, and that has been his main goal.”

But on a team with so many great players, Dorsey’s contributions are oftendownplayed. Ohio State’s focus is on Willis McGahee and Miami’s running gamemore than Dorsey and the passing attack.

“We want to stop McGahee from the get-go and put the game in Ken Dorsey’shands,” Buckeyes linebacker Matt Wilhelm said.

The Hurricanes will employ the same strategy against Krenzel. Clarett isOhio State’s biggest threat and will get most of the attention.

“The best thing they do is play-action pass and run the ball,” Miamidefensive back Maurice Sikes said. “If we can stop the running and make thempass, maybe that would be a good thing.”

Krenzel, the Buckeyes’ co-MVP, threw for only 1,988 yards and 12 touchdowns.But he didn’t make mistakes either, throwing five interceptions.

Krenzel doesn’t have gaudy statistics, but he is 14-1 as a starter and has aknack for coming through in clutch moments.

The biggest play of the Buckeyes’ season came against Purdue, when Krenzelthrew a go-ahead 37-yard touchdown pass to Michael Jenkins with 1:37 remaining.

“He doesn’t get rattled,” Buckeyes offensive lineman Shane Olivea said.”He’s really tough. He’s someone you want to have in that huddle onfourth-and-1. There is no one else I want throwing that ball.”

“If we didn’t have some people making plays in the passing game, wewouldn’t be here,” Ohio State offensive coordinator Jim Bollman said.

After beating Michigan in his first start last year, Krenzel was benchedafter the first quarter in the Outback Bowl. He didn’t win the starting jobthis year until the end of fall practice.

Even now, Krenzel faces questions about his ability. Most people credit theteam’s defense and running game for its success.

The Buckeyes were tied for the fewest touchdowns in the Big Ten duringconference play (21), had the fewest total yards (340.6 per game), and weresecond-to-last in passing yards (165).

“I don’t really pay attention to what other people have to say,” he said.”I don’t watch the news or read the paper. I know I have the confidence inmyself, and I feel my teammates have that confidence in me.”