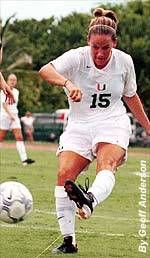 Coral Gables, Fla. (www.hurricanesports.com) – Laura West (Allen, Texas) of the University of Miami soccer team was named to the Verizon Academic All-District III Team selected by CoSIDA after leading the Hurricanes on and off the field.

West, a junior midfielder, currently holds an impressive 3.63 GPA. She is majoring in Communication Advertising.

West finished second on the team in overall scoring with 22 points behind team-leader Britney Butcher. She led the team in goals scored with nine and guided the Hurricanes to their first-ever NCAA Tournament appearance. Additionally, West led the team in shot percentage.