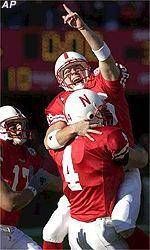 Nebraska Kicker Happy To Have Job Back

It was losing it in the first place.

A fit of jealousy and the arrest that followed caused Brown to miss two games of his junior season and play in a limited role in three more before finally regaining the job, which he isn’t planning on giving up again.

“It was really frustrating, trying to figure out my place and what role I was supposed to take,” Brown said. “I just wanted to be back on the field.”

It took about a month, but he eventually established himself as the top kicker as the No. 4 Cornhuskers (11-1) made a run for a possible national title.

Brown will start Thursday when Nebraska plays top-ranked Miami in the Rose Bowl.

“It’s that much sweeter. It really is,” Brown said. “It’s like when you work so hard for something you never want to spend your money because you earned it. You know what you put in to get it.”

Brown who pleaded no contest and was convicted in July of assault for fighting with a man who was out with Brown’s former girlfriend, was suspended for the season opener against TCU.

He spent the next four weeks trying to take his job back from freshman Sandro DeAngelis, who moved up because of Brown’s suspension.

“It’s one of those things that happened. As sorry as you are, you can’t exactly take it back, but you can express remorse and I have. My apologies went out to everyone involved,” Brown said. “It’s just a matter of losing control. You take those situations and you grow from them and you become a better person.”

Brown came back in the second week against Troy State and was 4-for-4 on point-after tries, but missed his only field goal attempt on a 35-yarder.

He didn’t play the following week against Notre Dame. DeAngelis got the start again the next week against Rice and was 5-for-5 on PATs in Nebraska’s 48-3 win, but the next Saturday at Missouri he had a field goal blocked. Brown assumed field goal duties and came through with a 38-yarder.

Coach Frank Solich finally decided to go back to Brown for good before the Iowa State game Oct. 6. Since regaining his starting job, Brown is 9-for-12 and one of his misses was from 50 yards. He is 27-for-30 on PATs.

“We did not want to have it be a situation where we were bouncing back and forth with a kicker,” Solich said. “Josh hit a hot streak there early on and basically has taken over the position.”

Brown had been rolling at the end of 2000. After missing a 28-yard field goal attempt in a one-point loss at Kansas State, Brown redeemed himself in the regular season finale by kicking a 29-yarder straight through the uprights as time expired to lift the Huskers to a 34-32 win over Colorado.

Then in the Alamo Bowl against Northwestern, Brown kicked a career-best 51-yarder was 9-for-9 on PATs in the Huskers’ 66-17 victory.

Brown, a junior from Foyil, Okla., even got a look at playing receiver during spring practice. He was well on pace to be a four-year starting kicker until early June 16.

Brown never questioned his suspension and has been very open about it ever since.

“I understood. I was in total agreement,” he said. “I put the university in a position to where they had to suspend me.”