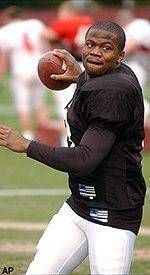 Nebraska's Blackshirts Get A Chance For Redemption In Rose Bowl

LOS ANGELES – The usually formidable Nebraska defense has had nearly five weeks to think about the 62-point, 582-yard barrage delivered by Colorado in the Cornhuskers’ last game.

At least two senior starters are just happy they get a chance at redemption in the Rose Bowl.

“I’ve never been embarrassed to be a part of this program, part of the Blackshirt tradition here. That day, I was,” linebacker Jamie Burrow said Wednesday, as the Cornhuskers prepared for the national championship game against Miami on Jan. 3.

“It was depressing, we knew we got whupped,” cornerback Keyuo Craver said. “I was out there and I didn’t know what was going on. They were killing us, they just shoved it down our throats. We learned from that.”

The Cornhuskers better hope so, because the Hurricanes (11-0) averaged more than 43 points this season.

Nebraska (11-1) entered the Nov. 23 game at Colorado unbeaten thanks in great part to a defense that had allowed 127 points (11.5-point average) to rank second in the country in scoring defense.

But it was obvious early on that the Cornhuskers were in big trouble.

“Colorado was just clicking on all cylinders,” Burrow said. “We didn’t execute. Probably nine of our 11 starters had their worst game of the season. We had to adjust on the fly, and we didn’t.”

Colorado scored two touchdowns before 3{ minutes had elapsed, and by the time the game was 18 minutes old, the Buffaloes had a 35-3 lead over a team that limited nine of its previous 11 opponents to 14 points or fewer.

And it wouldn’t get any better as Colorado eventually won a 62-36 decision.

“Our pride was bruised after that,” Burrow said. “We definitely have something to prove.”

Burrow said he needed some time alone when the team arrived home after the game.

“I didn’t want to be with anybody, didn’t accept calls from my family,” he recalled. “The next day, I was a little better.”

Burrow said he watched Oklahoma lose to Oklahoma State on Nov. 24 – the first of several setbacks by potential Rose Bowl teams that ultimately allowed the Cornhuskers to get their shot at the national championship.

“We are a better defensive team than we showed that day, we know that,” Nebraska coach Frank Solich said of the Colorado debacle. “We expect to get back on track, play a great defensive game. I have seen no lack of confidence.”

Solich knows what the Cornhuskers will be up against in the Rose Bowl.

“Miami’s not an easy team to play,” he said. “They generally move the ball against anybody they play, they’ve got great balance. The idea is to slow them down, not let them get out of control.”

In other words, the Cornhuskers have to prevent the Hurricanes from pulling a Colorado.

“I’m convinced we’ll play hard,” Solich said. “But a lot of teams have played hard against Miami and not gotten the job done.

“We’re capable of playing great football, we’ve demonstrated that. We just have to go out and get the job done.”

Nebraska defensive coordinator Craig Bohl said the Colorado game is in the past as far as he’s concerned.

“We’ve been working hard on Miami,” he said. “This is a chance to win the national championship. We played 11 great games, a lot of big games. You have to move on. It’s one game. There’s no time to fester on those things.”

Bohl had a simple explanation for what happened that day.

“I don’t think we tackled well, we were out of position,” he said. “That’s what caused the game to get out of hand. I thought Colorado played well.

“That’s five weeks ago, I’ve been thinking about Miami.”

When asked if there might be something positive to come out of the one-sided loss, Bohl smiled and replied: “If you just ask your average person in America if you can learn from your setbacks, the answer is, ‘Yes.”‘

Miami’s players arrived Wednesday, and the Hurricanes practiced in California for the first time in the late afternoon at the Los Angeles Coliseum – a short distance from the University of Southern California, where the Cornhuskers are practicing.