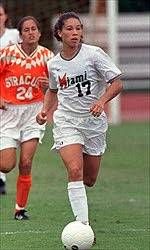 Bass, a senior defender, was named to the NSCAA All-South Second-Team after leading the Hurricanes to a 10-9 finish and a their first NCAA Tournament appearance.

After anchoring a defense that posted two shutouts and allowed one goal and just 14 shots in wins over Florida Atlantic, Central Florida, and No. 20 Florida, Bass was named to the Soccer Buzz National Elite Team and earned BIG EAST Defender of the Week honors. She also scored the game-winner against the Gators to give the Hurricanes their first win over a ranked opponent and a No. 14 national ranking.

Additionally, Gomez and Matthews were named to the NSCAA All-South Third-Team. Gomez, a senior defender, finished the season with four goals, three assists and 11 points. She scored the game-winning goal in Miami’s 3-0 shutout victory over Florida Atlantic (Sept. 4, 2001).

Matthews, a sophomore midfielder, contributed offensively for the Hurricanes as she tallied six goals, three assists and 15 points this season.