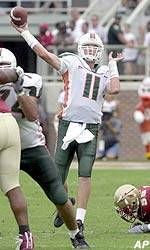 Get Your Hurricane Victory T!

TALLAHASSEE, Fla. – The streaks are over for Florida State, and so is another run at the national championship.

Ken Dorsey threw three touchdown passes and No. 2 Miami pulled away with a 28-point third quarter in a dominating 49-27 victory over the Seminoles on Saturday.

The loss ended No. 14 Florida State’s 54-game home unbeaten streak as well as its 37-game winning streak at Doak Campbell Stadium dating to 1991, when the Hurricanes beat them 17-16.

“I don’t care if the game was played in Alaska, it’s just great to beat Florida State,” Miami offensive line coach Art Kehoe said. “We’ll take a victory against them anywhere we can get it.”

Florida State (3-2), which played in the national title game the past three seasons, also makes its earliest exit from the title chase since 1990. The Seminoles, who had seven turnovers, last started a season with two losses in its first five games in 1995.

Now in jeopardy is Florida State’s record run of 14 consecutive 10-win seasons and Top 5 finishes in the final AP media poll. The Seminoles still have games against four Top 25 teams, including No. 1 Florida.

“It’s not like the program’s going to collapse,” Seminoles coach Bobby Bowden said. “This year is not over and we have next year. This is not a senior football team.”

By extending their winning streak to 15, the Hurricanes (5-0) made their claim to regain the top spot they lost last week to the Gators. But the players will be more satisfied they were the team that knocked the Seminoles out of title picture. Last season, Florida State made it to the title game even though Miami beat the ‘Noles and both teams finished with one loss.

This year, Miami was much the better team. So good, in fact, that Miami tight end Jeremey Shockey said, “If we had our `A’ game we could have scored 80 points. But we didn’t.”

Miami scored in a variety of ways as the defense forced freshman Chris Rix into four interceptions and two fumbles. The Hurricanes scored on a blocked punt by safety Ed Reed, a 36-yard fumble return by linebacker Jonathan Vilma and a flubbed field-goal attempt that turned into a 7-yard TD run by holder Freddie Capshaw.

Holding a 21-13 lead entering the second half, Miami struck early and late in the third period, with two TDs in 65 seconds early and two more TDs within 54 seconds late before a crowd of 83,836 – the second largest crowd at Doak Campbell.

Dorsey’s third TD pass, an 18-yarder to Andre Johnson, made it 28-13, and Rix’s second fumble was scooped up by Vilma, who ran untouched for a TD that put the Hurricanes ahead 35-13 with 9:56 left in the third quarter.

Miami went another scoring tear before the quarter ended. With Todd Sievers set to try a short field goal, the snap was bobbled and Capshaw stood up and ran it in for a TD with 5:08 left. After the first of two interceptions by Phillip Buchanan, Willis McGahee ran 8 yards for a TD that put Miami in command 49-20.

“This was a great win, not beautiful in any stretch of the imagination and we have some work to do,” Miami first-year coach Larry Coker said. “To come in here and win is a great tribute to our players.”

The Seminoles added a fourth-quarter score when linebacker Michael Boulware picked up another botched Miami snap on a field goal try and ran 73 yards for a TD.

Miami took a 21-0 lead just 19 minutes into the game as Reed blocked Chance Gwaltney’s punt and Markese Fitzgerald ran 5 yards for the score 6:12 into the game.

Miami struck again 28 seconds later. Defensive end William Joseph sacked Rix, who fumbled, and linebacker Chris Campbell recovered at the Florida State 27. On the next play, Dorsey found Johnson cutting across the middle of the end zone for the TD and the ‘Canes led 14-0.

In the second period, Miami moved ahead 21-0 thanks to a running, one-handed interception by Reed. Rix’s pass went off the hands of Javon Walker, with Reed grabbing the ball on the run. He returned it 21 yards to the Seminoles 36.

On the next play, Dorsey hooked up with Johnson for 35 yards. After three running plays failed to gain a yard, Dorsey dropped back to pass and found Shockey all alone in the back of the end zone for a 1-yard TD pass.

Rix led the Seminoles back, with Greg Jones scoring from 6 yards out and William McCray diving over from the 1 with 5 seconds left in the half to close the gap to 21-13.