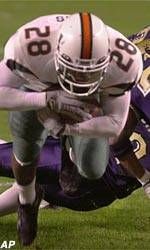 PITTSBURGH – Another big first quarter, another romp for top-rankedMiami. To the Hurricanes, though, it was just another imperfect game.

Miami’s second trip to Pennsylvania in less than a month ended just as itsfirst, when an overwhelmed Penn State couldn’t keep up with the Hurricanes’speed and size in a 33-7 victory Sept. 1.

“I think this team would like to score 100 points and shut everybody out,but that’s not realistic,” Miami coach Larry Coker said.

This victory – Miami’s 12th in its last 13 meetings with Pittsburgh – camejust as fast and just as furious during a 20-point first quarter, with Portisscoring twice and Dorsey throwing an 18-yard TD pass to Andre Johnson on a fadepattern one play after a Pitt fumble.

Portis, constantly eluding defenders with his cutback running, ran for 131yards on 24 carries, with touchdown runs of 1 and 4 yards. Dorsey failed tothrow for 300 yards for the first time in three games and missed a few openreceivers, but still was 19-of-33 for 223 yards and a touchdown.

Miami led 43-7 in the fourth quarter before backup quarterback RodRutherford, who accounted for all three Panthers scores, threw for a touchdownand ran for another in the closing minutes.

But Pitt’s 7-6 lead off Rutherford’s 2-yard scoring run 3:48 into the gamedidn’t hold up long against Miami, which has outscored its three opponents 47-7in the first quarter.

Portis had scored from the 4 with 2:14 gone as Miami needed just seven playsto drive 62 yards on its opening drive, started by Dorsey’s 23-yard swing passto Najeh Davenport and highlighted by Portis’ 22-yard run to the 6.

“We were able to do some things early and that made them a littleconfused,” Dorsey said. “I don’t think the layoff hurt us. We played prettywell out there, I thought.”

“We didn’t tackle very well. That has a lot to do with the skill of theirathletes and the size of the holes they had,” Pitt coach Walt Harris said.

Pitt welcomed back eight of its former stars, including Dan Marino, TonyDorsett and Mike Ditka, and All-American receiver Antonio Bryant, who missedall but one play of the first two games with a sprained ankle. But the bignames didn’t help and neither did Bryant, who for the third year in a rowagainst hometown Miami, wasn’t a factor with three catches for 39 yards.

“I thought with him coming back, they might try to focus on him more,”Coker said. “I was surprised they didn’t go to him more than they did.”

Pitt turned the ball over twice in slightly over a minute later in the firstquarter, with Miami failing to convert the first time but striking immediatelyfor the Dorsey-to-Johnson scoring pass play after Panthers quarterback DavidPriestley fumbled.

Pitt blocked a Miami punt early in the second quarter but couldn’tcapitalize, and Todd Sievers later kicked the first of his three field goals.

“It’s a tough loss because we’re coming off a loss,” Bryant said.”They’re the No. 1 team, but I tried to tell people they’re just another teamwe have to play. It got to some people, but with some people it didn’t soak it,and we’ve got to get everybody together on the same page.”

Miami started the second half needing only nine plays to drive 80 yards forPortis’ 1-yard misdirection run on a fourth-and-goal play, once again after aDorsey-to-Davenport throw – this one of 32 yards.

“He’s great to watch after he gets the football, he makes people miss,”Dorsey said of Portis. “That’s just him making a great play. He can take thatanywhere he wants to, and he cut it back and got it in. He’s been playing greatfor us.”

Miami shouldn’t have any trouble in going to 4-0 next week, when it playsTroy State, then plays at rival Florida State on Oct. 13.